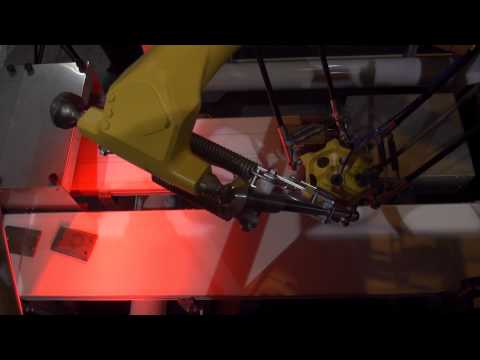 This robotic demonstration cell features the FANUC M-3iA/6S four-axis robot as it locates and picks randomly-oriented stamped parts from an in-feed conveyor, and stacks them into two different nests. The M-3iA robot is a larger version of FANUC Robotics M-1iA “Genkotsu” robot.

The FANUC M-3iA/6S seen here is a four-axis model; The M-3iA is also available in a six-axis model. The M-3iA robot offers this unique parallel-link structure, and accommodates payloads up to 6kg. In addition, it has the largest work envelope of any robot in its class. This robot operates in a completely enclosed structure, making it ideal for safe food environments.

This robot is equipped with FANUC iRVision Visual Tracking. FANUC iRVision Visual Tracking plays a major role in this robot’s speed and accuracy, and provides the robot with the ability to pick products from the moving conveyor.  These encoders provide for speed, position and direction inputs for accurate location of the parts. This robot can stack parts at rates exceeding 90 picks per minute. A single source solution developed and supported by FANUC, iRVision offers easy setup and operation for factory environments. A monitor displays what this camera is seeing.

The demonstration also features the M-3iA’s enhanced wrist which is 20 percent faster than the previous model. This single-axis wrist of the four-axis M-3iA/6S offers speeds up to 4000 degrees per second. A hollow wrist also allows hoses and cables to be routed internally, which minimizes wear and tear on the tooling cables.