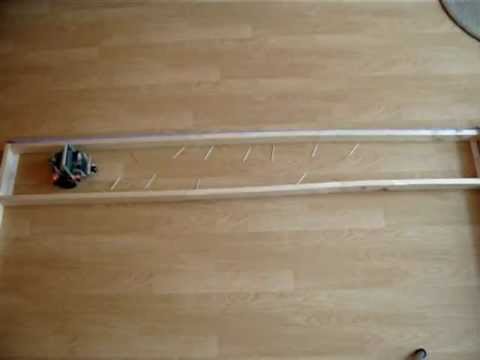 Autonomous mobile robot moves along the corridor, trying to keep a safe distance from walls. Robot is equipped with 5 digital distance sensors. Two GP2Y0D805Z0F (5 cm) sensors were placed on the left and right side of the robot chassis so that beyond some threshold robot is able to detect changes in distance from the walls. One GP2Y0D810Z0F (10 cm) was placed on the front of the robot chassis. Simulations show how even a simple robot equipped with digital distance sensors is able to maintain a certain distance from the wall so that there is no collision with them. Turning maneuver is also performed only on the basis of signals from distance sensors (no signals from the encoders). The signals from the sensors should be filtered to prevent the accidental signals (noise). Some difficulty is that the corridor at the end is tapered and robot hits its tail wheel ball on the wall which causes some slippage. However, this is not a problem in this case because the robot instead of the encoders uses only the signals from the distance sensors.