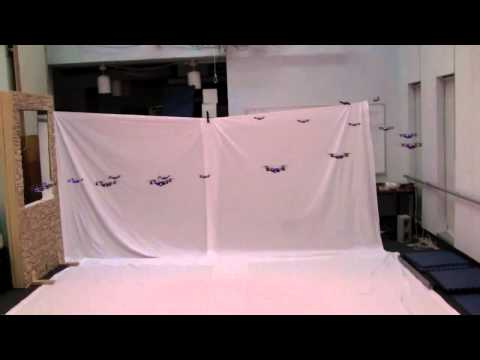 The quadricopter passes easily through windows in a vertical position regardless of the angle of the opening. It does so at a high speed and stabilizes itself the right way up or upside down immediately after.

There could be many applications for this type of drone: military intelligence, for the police, or even for natural disasters such as the collapse of buildings.

Swarm robotics is a new approach to the coordination of multirobot systems which consist of large numbers of mostly simple physical robots. It is supposed that a desired collective behavior emerges from the interactions between the robots and interactions of robots with the environment. This approach emerged on the field of artificial swarm intelligence, as well as the biological studies of insects, ants and other fields in nature, where swarm behaviour occurs.

Special thanks to Professor Daniel Lee for his support. Daniel Mellinger, Nathan Michael and Vijay Kumar from Grasp Lab at the University of Pennsylvania have designed this ultra easy to use UAV (Unmanned Aerial Vehicle).