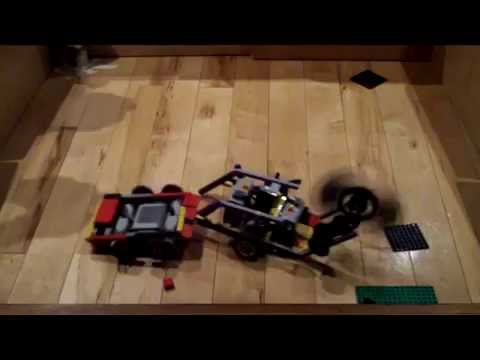 I borowed my friends buggy motor for this battle, and i really like them buggy motors!

END_OF_DOCUMENT_TOKEN_TO_BE_REPLACED

Since we discovered Arduino though everything has been streamlining and coming together. Recently, we downloaded the student version of Autodesk and are fine tuning our engineering. Also, since we've just moved to San Francisco from …
Women 2.0
END_OF_DOCUMENT_TOKEN_TO_BE_REPLACED

I was watching battlebots and it seems like if you mounted an ak47 on a bot, it would win the whole thing. Is that legal?

I haven’t looked up the official rules of the new version, but at least a couple of years ago:

Projectile weapons are allowed, but the projectile must be tethered so it will not travel more than 2 meters.

The projectile must be tested so that it cannot penetrate at any range a test barrier which is exactly one half the thickness of the arena walls.

So, while it may be possible to build a projectile weapon such as an air cannon that fires a large, slow steel slug: it would probably be a single shot weapon, and no, no guns are allowed.

Not only would that be way too unsafe: what’s the sport in that?