The Robosapien, however, introduced the world to the possibility that robots can be affordable enough for home use. Because of this, the Robosapien has received countless awards from various consumer bodies.

The Robosapien uses infra-red technology, much like a television remote control, to enable a person to direct its actions. It has pre-programmed functions which you can activate at the touch of a button. If you are thinking that controlling Robosapien is limited by its pre-programming, you would be quite wrong in your assumption.

The Robosapien is actually quite easy to hack and even its parts can be easily modified. This â€œerrorsâ€ in manufacturing are actually quite deliberate since the makers of the Robosapien actually designed it to be programmable by different people. This means that it can do practically anything that you imagine.

Modification of the Robosapien is not limited to the outside appearance. The fact that the robosapien is easily hacked and programmed means that it can actually be â€œtaughtâ€ different moves. So far, some owners have taught their Robosapiens to do some martial arts demonstrations as well as various household tasks.

In fact, there are also people who program their Robosapiens and endow them with various athletic abilities. They then engage in competition to find out who has the best Robosapien among them.

Humanity has long had different visions of what robots of the future would look like and what they would be capable of. The Robosapien is probably the first robot that actually comes near to the different images perpetuated by movies and science fiction novels. This means that if you get the Robosapien, you will have one mean-looking robot.

Another feature of the Robosapien is that you can program it to â€œreactâ€ to specific stimuli. This means that it can actually â€œthinkâ€ for itself without the aid of the remote control. This is probably where it got the name â€œRobosapienâ€. The term actually means â€œThinking Robotâ€.
Some people may think that the Robosapien is just a toy. However, for many others it represents human ingenuity at its finest. It represents how people can achieve every dream that they have. It represents the arrival of the future today.

The Robosapien may have a lot of various characteristics that make people want to buy it. But it may be that control is the one thing that really attracts people to buy products like the Robosapien. Letâ€™s face it: controlling something makes people feel powerful. It also helps them reach the dreams that they want to achieve. So if you want to learn martial arts but canâ€™t really make it work for you, get a Robosapien! 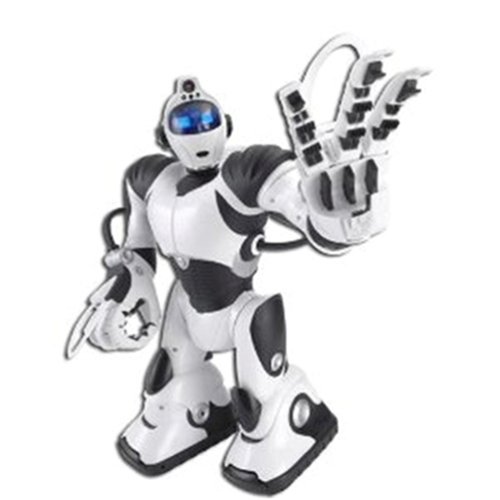