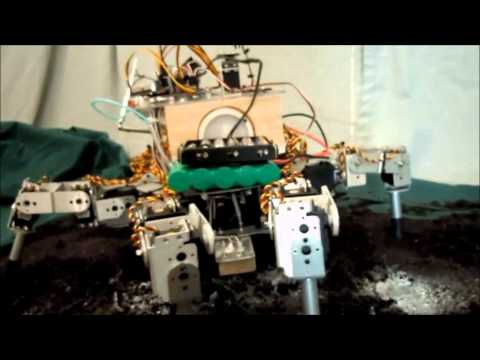 Prospero is the working prototype of an Autonomous Micro Planter (AMP) that uses a combination of swarm and game theory and is the first of four steps. It is meant to be deployed as a group or “swarm”. The other three steps involve autonomous robots that tend the crops, harvest them, and finally one robot that can plant, tend, and harvest–autonomously transitioning from one phase to another.

Prospero is controlled with a Parallax Propeller chip mounted on a Schmart Board. Its body is designed by Lynxmotion and the orginal programming allows it to walk autonomously in any direction while avoiding objects with its duel ultrasonic Ping))) without turning it’s body. An underbody sensor array allows the robot to know if a seed has been planted in the area at the optimal spacing and depth. Prospero can then dig a hole, plant a seed in the hole, cover the seed with soil, and apply any pre-emergence fertilizers and/or herbicides along with the marking agent. Prospero can then talk to other robots in the immediate proximity that it needs help planting in that area or that this area has been planted and to move on via IR (currently represented with a green and red LED ). The more seeds it plants, the more the “green” LED lights up, the more it draws other robots nearby (+2). The more it detects planted seeds, the more it repulses other robots with the “red” LED (-1)

Why small, autonomous robots?
Robotics in Agriculture
Despite its quaint reputation, agriculture has always been an early adapter of technology. This is evident from the beginning of mechanization with the cotton gin, McCormick’s Reaper, tractors, hybrid seed, to genetically engineered plants that protect themselves and grow in arid environments. Yields have grown quickly, but demand from developing countries and population growth are growing faster

We know that we need to continue to find ways to increase the productivity of land on a per unit basis. Agriculture has started to add computerization and automation to the current machinery with things like GPS based precision farming systems that can autonomously drive tractors, monitor yield, and apply fertilizer. However, these aftermarket add-ons are built around the single most expensive and awkward part of the equipment. The person controlling the tractor.

Today’s agricultural equipment has been designed around a person sitting in a chair. It cost a lot to employ a single person so the equipment grew larger in order to maximize the productivity of that one person. However, this method has its drawbacks. Farming decisions have to be made at the field level. Nature is chaotic and dynamic. Soil nutrients and moisture change from foot to foot. Having equipment that allows a single person to plant a thousand acres in a day comes at the cost of productivity per acre as a result of treating all those acres as the same. A swarm of small robots like Prospero would have the ability to farm inch by inch, examining the soil before planting each seed and choosing the best variety for that spot. This would maximizing the productivity of each acre, allow less land to be converted to farm land, feed more people, and provide a higher standard of living for those people because they would spend less of their money on food.

Please let me know if you have any questions. Thanks!