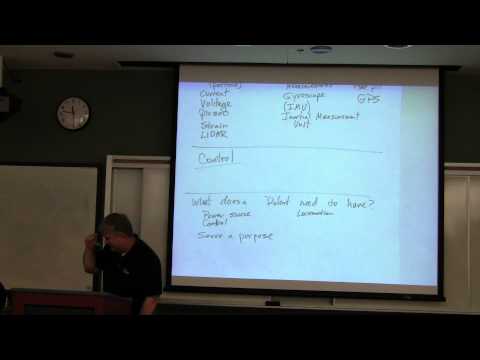 This video is Lecture n of the UNC Charlotte Introduction to Robotics course ECGR4161/5196 and MEGR4127 taught by James Conrad, Associate Professor of Electrical and Computer Engineering. The original recording date was May 24, 2012. More information about the Introduction to Robotics course can be found at http://webpages.uncc.edu/~jmconrad/classes.htm

The class uses the National Instruments DaNI Robot as the basis of robotics examples.

END_OF_DOCUMENT_TOKEN_TO_BE_REPLACED 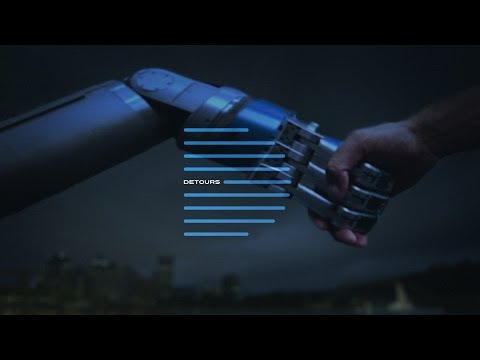 A century of steel production in Pittsburgh has mostly gone away, leaving in its wake industries based on academic research and robots. When it comes to robots, the goal is more focused on building a framework for the future rather than an infrastructure from the past. And for that reason, Pittsburgh has become a place where far flung ambitions are supported and encouraged, even if the end goal is a long way off.

END_OF_DOCUMENT_TOKEN_TO_BE_REPLACED

‘Say hello to ATLAS, one of the most advanced humanoid robots ever built!

ATLAS was developed for DARPA by Boston Dynamics. Software-focused teams from Tracks B and C of the DARPA Robotics Challenge will use the robot to compete in the first physical competition of the Challenge in December 2013 at the Homestead-Miami Speedway.

The DARPA Robotics Challenge seeks to advance the technology necessary to create robots capable of assisting humans in disaster response.

For more information on ATLAS and the Challenge, please visit www.theroboticschallenge.org .’

Atlas is a bipedal humanoid robot primarily developed by the American robotics company Boston Dynamics, with funding and oversight from the United States Defense Advanced Research Projects Agency (DARPA). The 6-foot (1.8 m) robot is designed for a variety of search and rescue tasks, and was unveiled to the public on July 11, 2013…

The design and production of Atlas was overseen by the DARPA, an agency of the United States Department of Defense, in cooperation with Boston Dynamics. One of the robot’s hands was developed by Sandia National Laboratories, while the other was developed by iRobot. In 2013, DARPA program manager Gill Pratt compared the prototype version of Atlas to a small child, saying that “a 1-year-old child can barely walk, a 1-year-old child falls down a lot … this is where we are right now.”

Atlas is based on Boston Dynamics’ earlier PETMAN humanoid robot, and has four hydraulically-actuated limbs. Constructed of aircraft-grade aluminum and titanium, it stands approximately 6 feet (1.8 m) tall and weighs 330 pounds (150 kg), and is illuminated with blue LEDs. Atlas is equipped with two vision systems — a laser rangefinder and stereo cameras, both controlled by an onboard computer — and has hands with fine motor skill capabilities. Its limbs possess a total of 28 degrees of freedom. Atlas can navigate rough terrain and climb independently using its arms and legs, although the 2013 prototype version was tethered to an outside power supply to maintain stability.

Atlas is intended to aid emergency services in search and rescue operations, performing tasks such as shutting off valves, opening doors and operating powered equipment in environments where humans could not survive. The Department of Defense stated in 2013 that it had no interest in using the robot for offensive or defensive warfare.

In 2014, Atlas robots programmed by six different teams will compete in the DARPA Robotics Challenge to test the robot’s ability to perform various tasks, including getting in and out of a vehicle and driving it, opening a door, and using a power tool. A variety of other robots will also compete. The contest was inspired by the 2011 Fukushima Daiichi nuclear disaster, and carries a US$2 million prize for the winning team…

END_OF_DOCUMENT_TOKEN_TO_BE_REPLACED

Robotics is the art and commerce of robots, their design, manufacture, application, and practical use. Robots will soon be everywhere, in our home and at work. They will change the way we live. This will raise many philosophical, social, and political questions that will have to be answered. In science fiction, robots become so intelligent that they decide to take over the world because humans are deemed inferior. In real life, however, they might not choose to do that. Robots might follow rules such as Asimov’s Three Laws of Robotics, that will prevent them from doing so. When the Singularity happens, robots will be indistinguishable from human beings and some people may become Cyborgs: half man and half machine.

Also watch these interesting videos
1.How The Titanic Was Built – BBC Documentary
https://www.youtube.com/watch?v=UmzCodBQt8s

4.BBC Documentary – Human Intelligence | How Smart Are You.
https://www.youtube.com/watch?v=UEePiqHhS-k

Unfortunatly, due to Japan’s shrinking population and poor government intervention plans, they will be completly unable to capitalize on their (shrinking) advantage in technology. India’s vast advantage in the fields of technology, and Germany’s massive hi amounts of capital will make them far larger powers then Japan.

Minimal requirements To start a robotic breakthrough we need the following capabilities :

object recognition capabilities of a 2-year-old child language understanding of a 4-year-old manual dexterity of a 6-year-old That will allow robotisation of most manual jobs in the world and will be the turning point in the robotic history.

and for introducing the robots into social context we would need

Lara is the first humanoid robot with artificial muscles (metal alloy strands that instantly contract when heated by electric current) instead of electric motors (2006).

Asimo (video) is one of the most advanced projects as of 2006.

M-Tran consists of standard blocks and is reconfigurableModular robots can be built from standard building blocks that can be combined in different ways.

M-Tran – a snake-like modular robot that uses genetic algorithms to evolve walking programs Self replicating robots – modular robots that can produce copies of themselves using existing blocks. Swarmanoid is a project that uses 3 specialized classes of robots (footbots, handbots and eyebots) to create an effective swarm. Such swarm should be able, for example, to tidy a bedroom with each robot doing what it is best at. Police Robots

Being a police officer or a fireman is a dangerous job. They will be replaced by robots. Robot police officers will be sent to the scene of the crime to stop it. The police robots will know automatically who is committing the crime (City Awareness Grid Electronic C.A.G.E). People are afraid of robots with guns. Guns will be illegal in the future. Police robots will only have non-lethal weapons.

Urbi (Universal Real-Time Behavior Interface) is an open source cross-platform software platform in C++ used to develop applications for robotics and complex systems. Urbi is based on the UObject distributed C++ component architecture. It also includes the urbiscript orchestration language which is a parallel and event-driven script language. UObject components can be plugged into urbiscript and appear as native objects that can be scripted to specify their interactions and data exchanges. UObjects can be linked to the urbiscript interpreter, or executed as autonomous processes in “remote” mode.

END_OF_DOCUMENT_TOKEN_TO_BE_REPLACED

Siemens Drive Technologies Division and KUKA Roboter GmbH have announced comprehensive cooperation at EMO in Hanover http://www.siemens.com/press/emo2013 Central pillar of the cooperation is integration of KUKA robots and Siemens CNC solutions for loading machine tools. In this video you can watch Manfred Gundel, CEO of KUKA Roboter GmbH and Dr. Robert Neuhauser, CEO of Business Unit Motion Control Systems at Siemens Industry Sector highlighting the details of the cooperation. This press conference took place at the EMO fair 2013 in Hanover.