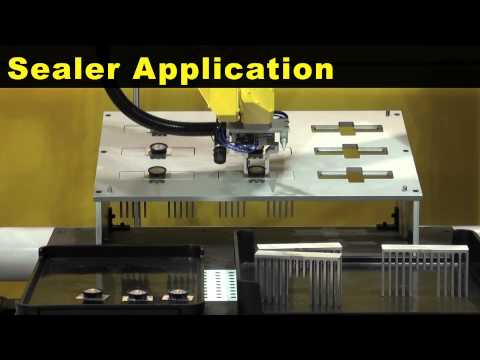 A FANUC M-3iA six axis robot equipped with iRVision 2D, a two-jaw mechanical gripper and a sealing gun assembles a concentrated photovoltaic solar panel. The M-3iA robot scans and locates nine randomly oriented heat sinks and concentrated photovoltaic assemblies (CPAs) using iRVision Snap-in-Motion software. The M-3iA’s flexible three-axis wrist allows it to pick, reorient and insert each heat sink at a 15 degree angle into the solar panel. Next the robot simulates the application of sealer to the heat sink and CPA’s are assembled into the solar panel. The M-3iA robot is designed to maximize speed and flexibility for assembly, small part handling and picking applications.