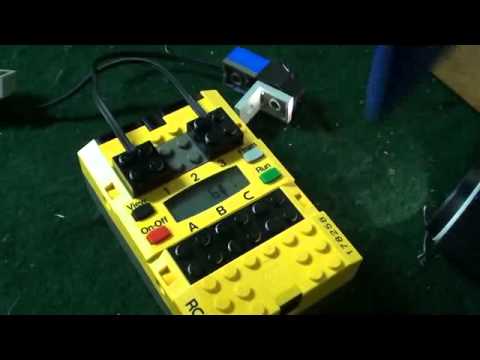 Proof of concept. LEGO counter based on digital counter by Moontaj.com.
The counter starts at 15 then counts down each time the “light beam” is broken. The light beam will be broken when the RCBS Pro 2000 press level crosses the beam. After 15 crosses the LEGO Mindstorm beeps 3 times to indicate a new primer strip should be added. Next it resets and begins to count down from 25. At which point another primer strip should be added when the beep occurs. This goes on until the unit is turned off. A push button can be pressed any time to give you the total number of counts (ie. # of primers done) at any time.

In the example you will note that at the 17th and 18th count, which occurs during count 25 and 24 the push button is pressed. Also note that in the first 15 count around 6 or 7 the light beam did not register it. This is due to the wait time between light beam crosses. It is set for 4 seconds right now but that may not be enough for when a press handle goes up/down. Need to work on changing this number once this is set up on the press.

NOTE: I DID NOT CREATE THE ORIGINAL CONCEPT JUST COPIED IT TO A LEGO MINDSTORM.