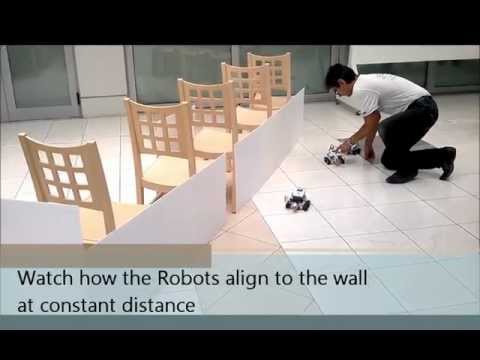 On Tuesday, May 15 2012, a different kind of exhibit appeared at the Art Section opposite the ACS Theater. Further, beyond the doors leading to the patio, teams of students were tinkering with strange looking contraptions, mildly reminding Lego’s on steroids. A presentation was looping on the wall, showing outlines of mechanical components, complex plans, computer programs and inspired contraptions, capable of completing real-world tasks. It was the final presentation of the Robot derby, the capstone of the “Introduction to Lego Robotics” class that was taught by AIT professors at ACS throughout the Spring Semester.
Each team made a brief presentation and put its specially programmed robot to task: Follow a wall in parallel until a parking space is found, then maneuver and park. Each little robot calculated distances, chugged along, avoided short spaces, found a big enough spot, and parked in its own idiosyncratic way: either parallel parking, or pivoting in place, or going vertical then straightening out.
The various photographs and videos of happy students holding proudly their robots are only the culmination of a semester long effort. A Lego Robot is not a toy: It is serious business. It entails designing, building, and programming robots that will operate in the real world. The Lego Mindstorms Kit contains all the building blocks like gears, servos, connectors, wheels, differentials and a variety of sensors, as well as a programmable computer unit — the Mindstorms Brick — to make a moving, sensing (seeing, hearing, touching, estimating), grabbing, deciding, performing robotic machine that successfully, repeatedly, tirelessly executes a real world task.
Successfully building a robot that completes the challenge was not an easy task. Two AIT professors, Lazaros Polymenakos and Aristodemos Pnevmantikakis covered the theoretical material and the programming methodology. This including kinematics, geared transmission, exploring sensor capabilities and learning how to program motion, perform calculations, reading and calibrating sensors and taking and implementing decisions into actions. Three AIT senior researchers and Ph.D. candidates (A. Stergiou, N. Katsarakis, and Th. Petsatodes) became the mentors — one per student team — teaching them the tricky aspects of programming and helping students debug their programs as well as assisting them in building functional robots for the task. ACS faculty, A. Tsokos and Ed. Woolbert oversaw student work and assisted in assimilating the material. Lecture notes, examples, book chapters and sample programs where uploaded on the ACS Moodle e-learning platform for students to study at home. Two visits to the AIT Autonomic & Grid Computing laboratory were scheduled so that students could get a glimpse of a university level environment and work in real laboratory conditions. In all, it took 10 full 3-hour teaching and mentoring sessions and the completion of an easier challenge for a line following robot as proving ground of knowledge acquired in order to reach the level of skills required to solve the challenge.