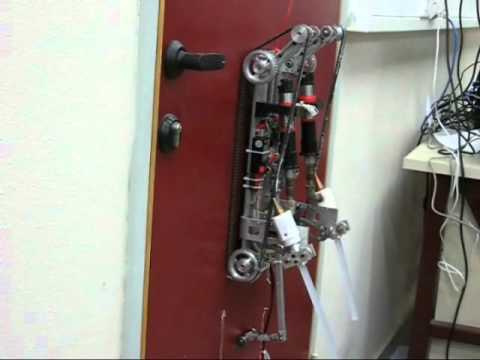 We developed four types of wall climbing robots as follows: First, a snail inspired wall climbing robot was developed. This robot consists of two tracks that are being attached to the wall using hot-melt adhesive. This attachment method allows carrying high payloads relative to the robot’s own weight. It also allows staying on the wall for long period of time, and therefore can be used for installing navigation beacons or antennas in ad-hoc networks. The second robot uses dry adhesive on all four wheels of the robot. We installed a rotating tail that pushes against the wall underneath the robot and produce a counter gravity torque. This robot climbs smooth walls very well and can perform complex maneuvers during climbing. However, this robot cannot climb on rough or dirty surfaces. The third robot is a four legged climbing robot that uses claws for hanging itself on the small cavities in the wall (PDF). The aim of this robot is to climb the very same way a cat climbs. Finally the fourth robot is a magnetic climber that uses magnets to climb on ferromagnetic surfaces such as bridges and ships. All these robots have been built in the robotics lab and has been demonstrated to climb vertical surfaces.
The following video presents four wall climbing robots
More info at: http://robotics.bgu.ac.il