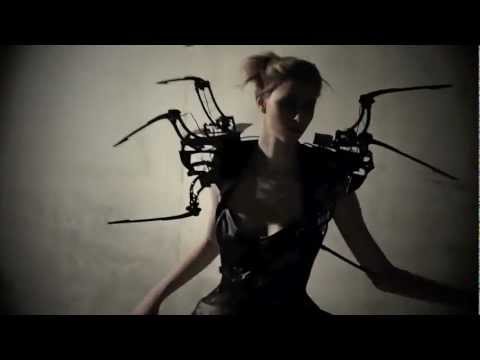 Exploration within the realms of robotic dresses; a spider dress gave birth. A cute little host creature created by fashiontech designer ANOUK WIPPRECHT and hacker & engineer DANIEL SCHATZMAYR – A prototype of a mechanic dress equipped with sensors indicators and controllers, created with the aim to give more power and ‘psychological thrills’ to the sugar sweet character that performative wearables often have. Sensoric, servo controlled, mechanic, microcontroller based and reacting//attacking upon approach, inspired by the game LIMBO.

Presented during VIVE LE ROBOTS / Cafe Neue Romance in Prague during the EU Robotics week NOVEMBER 2012 and prototyped during TEDX Vienna in collaboration with the ‘METALAB’ – Vienna’s famous hackerspace. And with the use of black plexiglass by EVONIK industries (Germany)